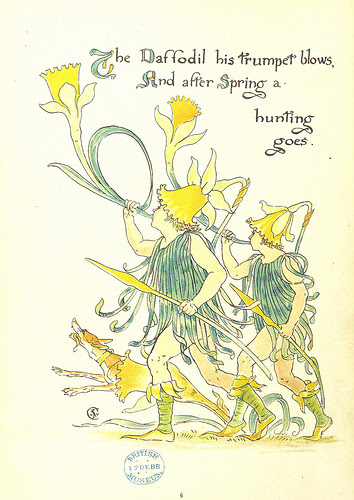 And a whole batch of his flowers have now been released into the public domain via Flickr.

A selection of dizzy daffodils

Daffodils don’t really come under the literal Photographing Wildflowers remit, as the only ones to be seen around here are either cultivated, or garden escapees. But I couldn’t resist sharing these fun images from the Victorian era.

The Legend of the Narcissus flower

In Greek mythology, a hunter by the name of Narcissus was renowned for his beauty. He happened to be the son of a river god matched with a nymph. He was extremely proud of himself, which attracted the attention of Nemesis (the spirit of divine retribution), who attracted Narcissus to a pool. He saw his reflection and fell in love with it to the extent that he was unable to leave it, and eventually died.

Floral fantasies of an English garden

These lovely images originate from two books by Walter Crane (1845-1915): “A Floral Fantasy in an Old English Garden. Set forth in verses & coloured designs” 1899 and “Flora’s Feast. A masque of flowers, penned & pictured by Walter Crane” of the same year. I have not seen the books in the flesh but would infer there is some crossover between the two!

The meaning of narcissus flowers

Daffodils, jonquils and narcissus are the birth flowers for March. In the Victorian language of flowers, they represent new beginnings (presumably because they flower early in the season), and desire.

Although I haven't mentioned Foodie Fridays recently, I haven't forgotten about them. In fact on holiday in Florida last month,…

A wild flower for Mothers Day Primroses grow en masse along the country lanes of Sussex, especially on grassy roadside…

A wild flower for Mothers Day Primroses grow en masse along the country lanes of Sussex, especially on grassy roadside…