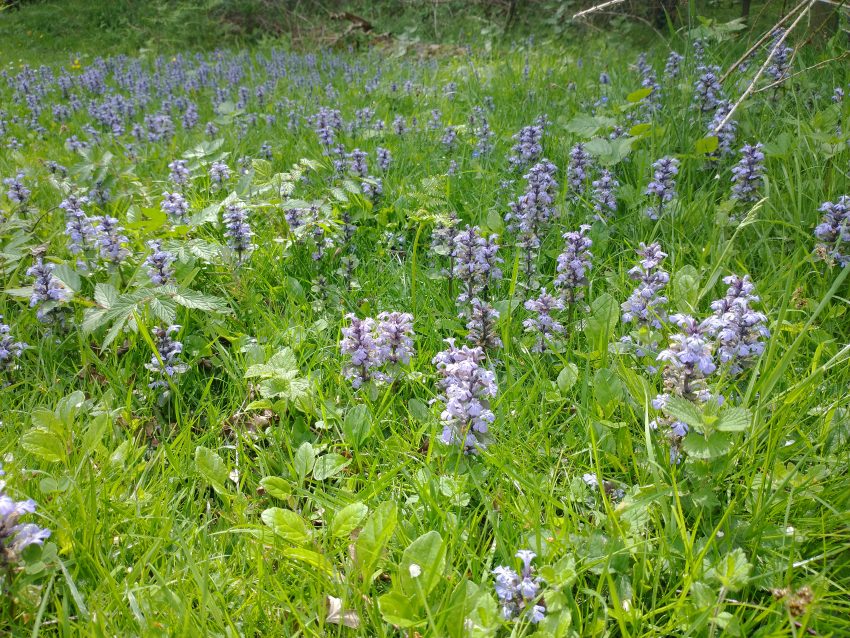 Ajuga reptans is by far the most common Ajuga in the UK, although there is also Pyramidal bugle Ajuga pyramidalis (blue flowers) and Ground-pine Ajuga chamaepitys (yellow flowers) which I don’t expect to see anytime soon.

Bugle is a wildflower which has long runners (horizontal rooting stems like a strawberry) that allow it to spread sideways and root into the ground nearby, forming new plants. This makes it a popular ground cover plant in garden centres where a form with purple foliage is often offered.

A damp woodland habitat was exactly where I found it in June at Kirkby Moor Nature Reserve in Lincs. It was growing in short grass on the edge of the woods. The flower spikes were about 15cm high, above shiny 5cm long obovate leaves (undivided leaves which are egg shaped with the narrower end at the base).

The flower stem itself had a purple tinge. The individual flowers were up to about 1cm across and had a passing resemblance to orchid flowers. The blue flower colour is realistically more of a lavender with violet veins.