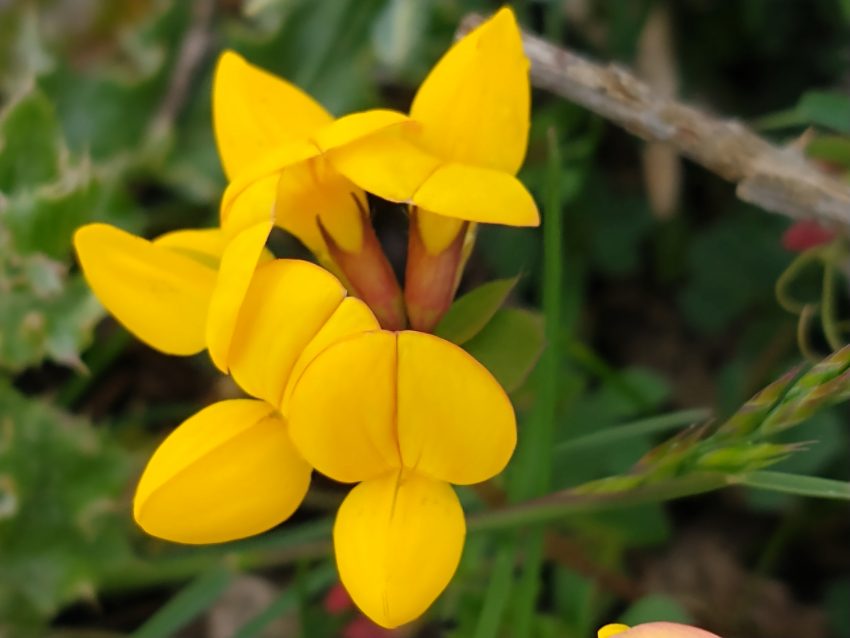 Bird’s Foot Trefoils are a group of yellow pea flowers

UK Lotus species are quite similar

The name Trefoil relates to the leaf layout of these plants. They appear to have their leaves arranged in threes, but a botanist will tell you that they’re actually fives, with the last two attached to the base of the stalk. These low-growing plants are part of the Pea family and all have a few 1cm long yellow and/or orange flowers held unsymmetrically around the stem. The name comes from the appearance of the brown seed pods, although I think the flower buds are equally bird-like.

This is the only species of Lotus that I have yet encountered. It is common on chalk grassland near where I live in Sussex, and forms low-growing mats. It has some other imaginative names such as Grannys toenails!

There is also a sub-species which is Lotus corniculatus var. sativus which is often included in bird seed. This has very upright flower stems which are hollow, and no red or orange tinge.

Other UK Trefoils such as Hop Trefoil, Trifolium campestre are not Lotus species so will have a separate page in time.

Read about more members of the pea family: