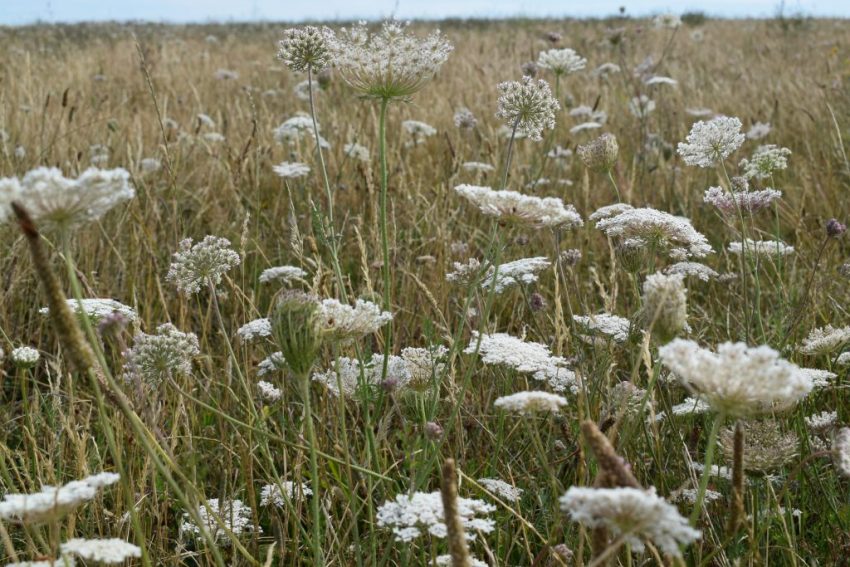 Daucus carota can easily be confused with other flowers with similar umbel shapes such as cow parsley and hemlock. The flowers are up to about 7cm across and can grow to a metre tall or more. They have flat white umbels in June until August. When I’m not sure of the identity, I look for the tiny dark red dot which is often in the centre of the flower, looking like a tiny insect. The leaves are ferny. It likes the seaside and chalk, and places I have seen include in grass on Seaford Head, Tidemills Sussex and the North Kent Coast. The main image above shows a sea of carrot flowers at Reculver in Kent.

Carrot flowers contract once they have finished to hold their seeds in a beautiful goblet shape.

When I was on the South Devon coast I came across this flower right by the sea. Initially I thought it might be Moon carrot – Seseli libanotis which is rare in the UK but grows in Seaford Sussex. But further research revealed this variety, which has a much rounder head than Wild carrot and more substantial foliage.

Out of interest, the cultivated subspecies which is grown as a vegetable is Daucus carota ssp sativus.