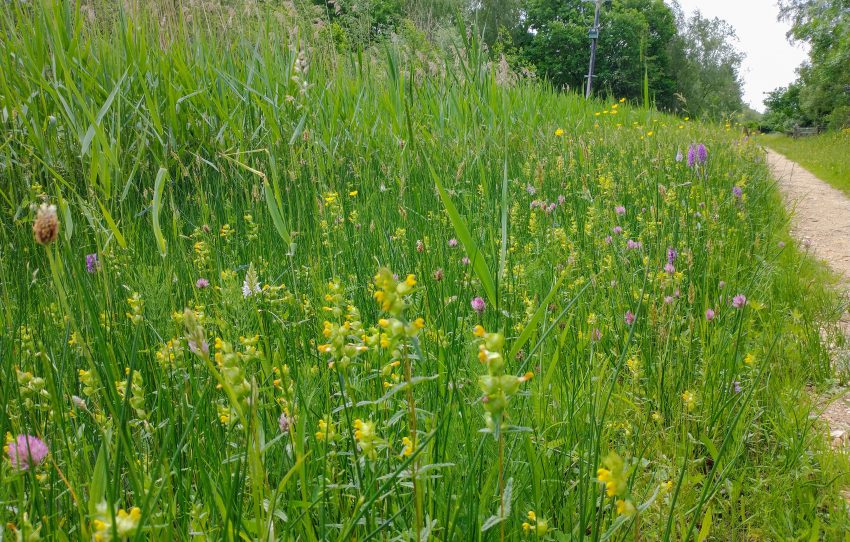 A summer of orchids

I’m so glad I joined Seaford Natural History Society recently because they really helped me with my orchid spotting this year! Back in May I met Polly who was so helpful showing me the Early purple orchids, Orchis mascula on Seaford Head. She told me about the swathes of Green-winged orchids, Orchis morio to be found on the golf course there, and the Common Twayblades, Neottia ovata and Common spotted orchids, Dactylorhiza fuchsii nearby. I was told about some Burnt orchids, Neotinea ustulata in Cradle Valley Seaford by Chris, another member of the society. These were followed later by Autumn Lady’s Tresses, Spiranthes spiralis in the same spot.

Out walking I spotted Pyramidal orchids, Anacamptis pyramidalis in the Last Meadow in Seaford. Then there was the abundance of orchids including Southern marsh orchid, Dactylorhiza praetermissa at Kirkby Moor nature reserve in Lincolnshire, and a Broad-leaved Helleborine, Epipactis helleborine in woodland near Hastings, Sussex. Not forgetting Birds nest orchids, Neottia nidus-avis under beech trees near Stockbridge, Hampshire.

This is a very bad photo, for which I apologise! When I’m out with other people, I always spend too much time talking and not enough photographing! But you can see the diagnostic markings along the length of the leaves. For better images of this wildflower, see my Orchids page.

These beautiful flowers were in bloom at the same time as the Early purple orchid. They can be identified by their striped hoods, although they didn’t look very green to me! They were growing in profusion on the golf course and we counted over two hundred in the rough of a single fairway.

Mike and I went for a lovely peaceful walk along the river Test near Stockbridge in Hampshire in May, and spotted these strange flowers in beech woodland. I wasn’t sure immediately what it was but it was certainly interesting. It looked like it was parasitic as it was brown in colour rather than green. So it wasn’t getting its nutrients from photosynthesis.

I was supposed to be on the lookout for Twayblades on Seaford Head but this was much easier to spot! This flower is distinctive in its markings and also the transvers blotches on the leaves.

I went out searching for this, never having seen it before. I was expecting quite a blousy yellow flower from the pictures I’d seen. It took me ages to find one, because the blooms were slender and faded into the background being greenish yellow. Once I found one, I was able to see a hundred or more. What finally caught my eye was the eponymous broad pair of leaves at the base of the flower. I noticed that quite a few had been picked (or eaten by animals?) as you can see in the second image.

The showing or orchids at Kirkby Moor nature reserve in Lincolnshire this June was fabulous. There was a high concentration of Yellow rattle, Rhinanthus minor, which I assume had been intentionally sown in order to keep down competing species. I read online that this nature reserve has a beautiful display of Southern marsh orchid, so I’m not attempting to ID it from the photos as it is very similar to Common spotted orchid and has been known to hybridise.

I was really impressed with this local showing of Pyramidal Orchids in the Last Meadow. I’ve never noticed it previously but I expect you have to be in the right place at the right time! I counted four hundred plus in the side of the field nearest the road. I did notice the area was cleared last autumn so guess that might have had something to do with it.

Neotinea ustulata is also known as Orchis ustulata. It is considered Endangered in Great Britain, so I was pleased so see a few growing in Seaford.

This was my first Helleborine, spotted out walking in woodland near Hastings in East Sussex. I was quite surprised how large it was (about 30cm tall). It was very exotic looking and took me by surprise being right next to the footpath. I’m hoping to go in search of more Helleborines nearer home in Friston Forest near Seaford sometime soon.

I was told where in Seaford to find these orchids but was very surprised how hard they were to spot. I knew there might be up to two hundred on Seaford Head but only managed four. The problem was that they are very small (about 10cm high) and white. There are a lot of white flowers in the grass in August! It didn’t help that the leaves weren’t yet showing. The way the flowers twist on the stem is quite special.

Update Nov 2021 – As I’ve been updating the Orchids page, I realised that I missed Chalk fragrant orchid Gymnadenia conopsea from this post. I spotted it in Cradle Valley Seaford in July on the same day as the Burnt orchids.