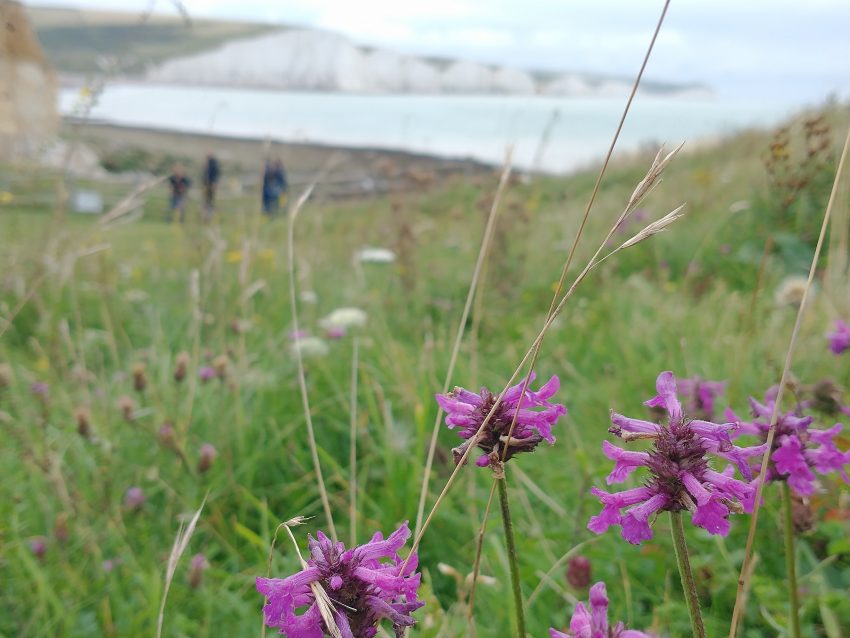 After counting Moon Carrots on Seaford Head Nature Reserve in Sussex, I kept my phone at the ready for photography and walked home slowly. This post is in two parts because I took so many photos! This part will be about Hope Bottom and the area around Hope Gap where we did the Moon Carrot survey, then Part 2 will be about the rest of the nature reserve I passed through on the way home. The area is chalk grassland with exposed clifftops.

After my training in chalk grassland indicator species in July, I had my eye out and spotted a few. Look out for the L which means they’re on the list we were given by the National Trust. However, as usual, please remember that this blog is not a comprehensive species list – there were more present than I photographed!

Flowers on the Cliffs near Hope Gap

In the main image above, you can see the Seven Sisters cliffs in the distance, a few people remaining from the Moon Carrot survey, some Moon Carrots, and in the foreground Betony Stachys officinalis. This first batch of pictures were all taken in short grass.

Superficially similar to Betony, Wild Basil is clearly different when you see the two together. For example, the flowering habit and leaf shapes are different. L

It took me a while to find out what this was when I first saw it on the Kent coast a couple of years ago. L

Yellow Agrimony with pink Betony in the background.

Not in flower as this Viola flowers in early spring, but we had been looking out for it during the grassland surveys so I was confident in the ID. L

This flower was also growing on slopes set a little way back from the cliffs on my way to Hope Bottom.

The following wildflowers were growing in longer grass in a more sheltered area a few tens of metres away from the cliffs themselves.

This blue butterfly was feeding on the Yarrow, with Wild Basil nearby.

This was such a pretty area with blues yellows and pinks. The Common Ragwort is listed as an “undesirable species” for chalk grasslands by the way. And it is also known as Stinking Willie apparently.

What a beautiful parasite.

I’m very familiar with Silverweed as I sometimes sell it as a pressed flower in my shop. This Potentilla has yellow flowers, so don’t be distracted by the Red Bartsia growing through it!

I love this large blousy plant with its four-lobed stigma (the white piece dangling from inside the flower).

I think the sheer number of flowers spotted is related to the fact that it was quite a wet spring and summer. I continued my walk back towards some short grass where I found many more wildflowers including more chalk grassland indicator species.

Here’s a Sussex Wildlife Trust map of the nature reserve showing where you can find Hope Gap and Hope Bottom.