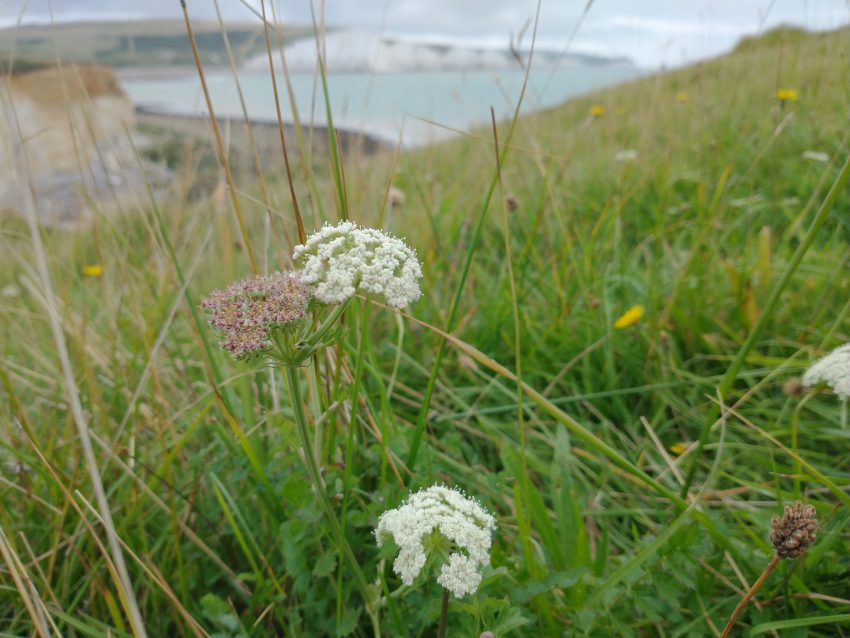 Seaford Natural History Society counts wild plants of Moon Carrot every year to monitor numbers. Being a clifftop plant, coastal erosion means that the whole colony is in danger of failure in a single rock fall.

The plant is found right near the cliff edge between Seaford and Cuckmere Haven in the South Downs National Park in East Sussex. Seseli libanotis is superficially similar to Wild Carrot Daucus carota but when in full flower, the shape is more cauliflower than flat landing pad. The name originates from the white moon-shaped appearance.

We counted plants up to the cliff edge

Bearing in mind health and safety of course. We were not allowed closer than 10m from the edge as this area is prone to cliff falls. The yellow markers in the pic show how near the edge we were allowed. You can also see from these photos how variable the plants are in size. They can grow to 60cm high or more in a sheltered lush environment, but here where it is harsh and the soil is thin they can be as short as 15cm. All the white dots in the photo below are Moon Carrot. Luckily Wild Carrot doesn’t grow in that area, making counting easier. And we counted thousands which is good news!

See the Seaford Natural History Society report 2021 on Moon Carrot. The survey was carried out in association with Sussex Wildlife Trust and you can read an article about counting Moon Carrot on their website too, including a photo of the team.

I also spotted Moon Carrot on Seaford Head on a walk in June 2020.

I stayed on Seaford Head after this survey and spotted wildflowers in the Hope Gap and Short Cliff areas.

A week later I was back and photographed the Seseli flower stems and calyx teeth.