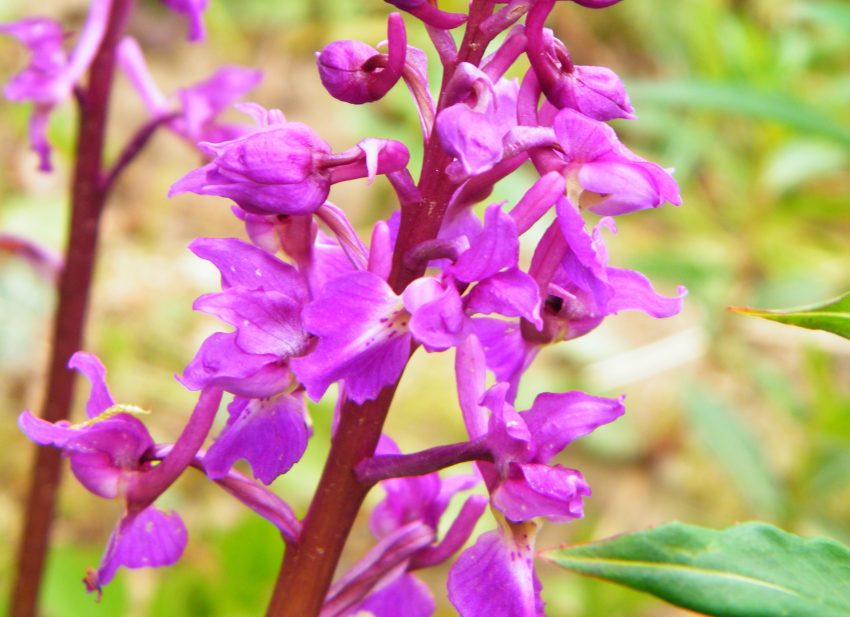 Orchis includes Early purple and Green winged orchids. Generally speaking, the flower shape resembles a human body. However assigning a flower to a particular Genus of orchid isn’t straightforward and plants are often re-assigned when new evidence comes to light. For example, you may know that Burnt orchid Neotinea ustulata was until recently listed under Orchis.

Here are some photos I took of this flower in profusion in the Battle area in Sussex in grass and hedgerows on May Day. According to Plantlife, the flowers arrive about the same time as bluebells – that’s a combo I’d like to see! The leaves I saw were about 10cm long, broad, glossy and spotted. Those spots are noticeably arranged in rows along the leaf rather than across it.

The big blousy flowers were vibrant purple on red stems. The plants I saw that were in full flower were about 20cm tall. Each flower tends to have three lower lobes with the central one slightly notched, although the notch is hard to see in my photos. Apparently the flowers can also be found in paler pinks and even white, and the stems can contain less red than the ones I saw, making ID more complicated. The flowers have a long spur behind.

I’m hoping to see a Lady orchid, Orchis purpurea, sometime soon, which only has two main lower lobes in the flower.

I saw these flowers at about the same time as the Early purple orchid and they were about the same height. They were growing in shortish grass on chalk. I noticed that the leaves had no markings. I also noticed that the purple flowers were a similar colour, but the stems were green to purple rather than the more eye catching green to red mentioned above. The actual flower was a different shape, with the upper sepals being bent round in front of the flower to form a stripey hood or wings. Although I was expecting the wings to be green, I couldn’t see any green colouring in the flower at all.

More about Orchids in general – pages which I’m updating as I go.