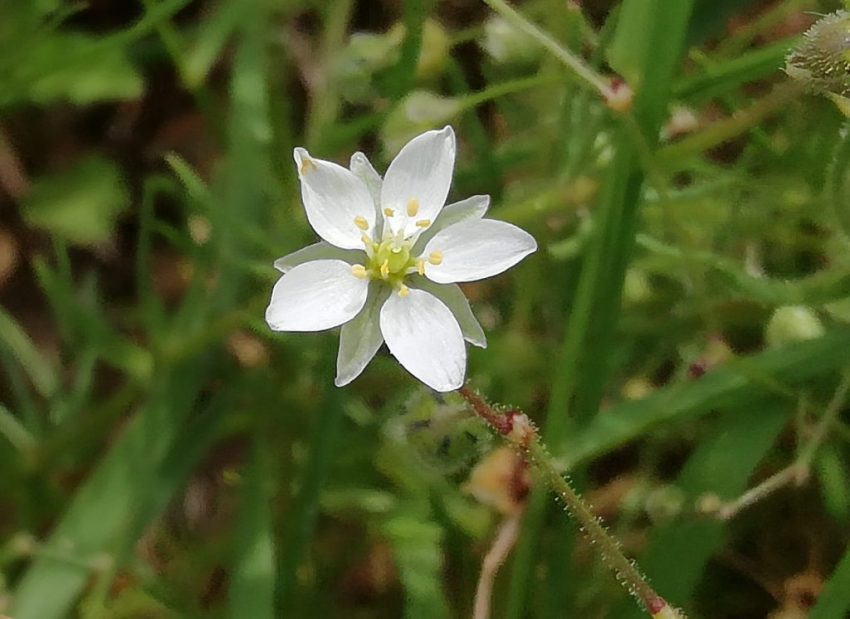 A family walk around fields off the Alfriston Road

There is a track that runs out of Seaford from Alfriston Rd towards Alciston and passes the Last Wood, I think it’s called The Comp. When I visited with my family in early June the fields contained oil seed rape which was developing seed. My husband and grown up kids were very patient with me as I stopped every few minutes for a pic!

Flowers of the field margins

I’ve seen a lot of Common toadflax, Linaria vugaris, this year – it’s a lovely blousy plant. I’m not so familiar with Field madder, Sherardia arvensis, but the pale blue does tend to stand out, and I might have had trouble identifying it if I hadn’t seen it when out with the Wildflower Society in Eastbourne last year. The Wild carrot, Daucus carota, was some of the sturdiest I have seen, but easily identified by its central red dot. The Corn spurrey, Spurgula arvensis, was new to me but confirmed using my copy of Rose followed by a trawl of web images.

I failed to identify the pale pink Brassica which looked like it was the remains of a previous crop by the way it was spread about, but the nearest thing I could find was Hesperis.

As a bit of an amateur I also failed to identify the mayweed because I failed to sniff it at the time! I assumed it was unscented because it doesn’t look anything like the annual chamomile which grows in my garden.

We came upon a wildflower meadow which was beautiful and bounded on two sides by shrubby banks. I don’t know the area well enough to know if it was artificially sown, but it was gorgeous. In amongst various grasses I could see oxeye daisy, sainfoin, purple and yellow vetches and white clover.

Walking back along the outside edge of the wildflower meadow, along the hedge in the left of the above pics, there were two large patches of campion. I think both were Silene vulgaris  as they were both about the same height and both growing in long grass, but the first was pure white, and the second had a touch of pink in the bladder.

I also have a blog about dried flowers and you can read there about why I have annual chamomile growing in my garden!

I’m not a botanist but I’ve been interested in wildflowers all my life and have only just started to try hard at identifying them. I prefer not to resort to jargon or technical methods – it’s all about the beauty. I only try to I.D. plants that are in flower.